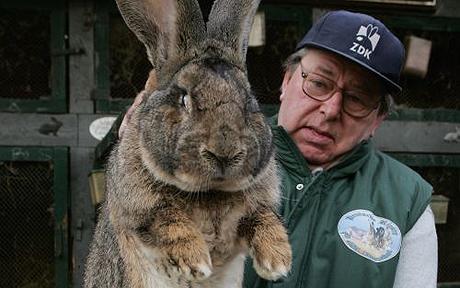 EBERSWALDE, GERMANY – Pensioner Karl Szmolinsky, who raises a breed of rabbits called giant grays, shows Robert 2, an 8.5kg giant grey who is 74cm long and has ears 25.5cm long, in the backyard of his house on January 15, 2006 in Eberswalde, Germany. Szmolinsky said his rabbits reach a maximum weight of 10.5 kg (23.1lbs.). (Photo by Sean Gallup/Getty Images)

1. The World’s Largest Rabbit named “Darius” weighs approximately 50 pounds and is currently 4 feet, 3 inches. Although this might sound unbelievable, “Darius” is indeed a real rabbit that currently lives with its owner Annette Edwards from the UK. It has been reported that Darius thinks he is a dog.
2. The “most valuable” rabbit on Earth, “Darius”, is currently insured for around $1.6/million and has his own personal caretaker aka body guard. (Not that anyone would be brave enough to mess with a 50 pound rabbit anyhow.)
3. In the wild some female rabbits can produce about eight litters of bunnies per year.
4. The largest litter of bunnies every reported consisted of 24 kits.
5. Rabbits are natural runners and can reach speeds of up to 30 to 40 mph.
6. Domesticated rabbits that people raise do not open their eyes until they reach about 2 weeks of age.
7. Baby domestic rabbits are actually born fur-less.
8. Rabbits have 28 teeth.
9. The World’s oldest rabbit on record lived to be 16 years old.
10. The average lifespan of a domesticated rabbit is around 5 to 8 years.
11. Pet rabbits generally live longer than rabbits used for production and those living in the wild.
12. With the right guidance rabbits can be trained to live indoors perfectly.
13. In the UK the rabbit is the third most popular pet option.
14. The average heart rate of a rabbit ranges between 130-325 beats per minute.
15. It is estimated that over 2 million U.S. households own a pet rabbit.
16. Thousands of rabbit shows take place annually in the Continental United States alone, each year.
17. Male rabbits are referred to as “bucks” and female rabbits are referred to as “does”.
18. Believe it or not, a rabbit’s teeth never stop growing throughout its life.
19. Rabbits can jump up to 36 inches or higher.
20. In general rabbits are very clean animals that will groom themselves and even each other.

Check out this article on the topic of raising rabbits. 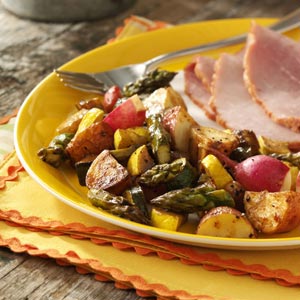