Celebrate the Chinese New Year by coloring this cute chick from Hello Kids.com. 2017 is the Year of the Rooster.

Celebrations will begin on January 27, New Year’s Eve, and typically last around two weeks, making this the longest holiday in the Chinese calendar.

This year the festivities are set to end on February 2. 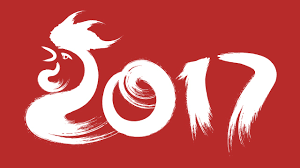 The Chinese calendar attaches different animals from the zodiac to each lunar year in a cycle of 12 years.

This year is the Year of the Rooster.

Roosters are the tenth sign in the zodiac and are seen as confident, honest and hardworking. They also enjoy being around people but can be seen as attention seekers.

Red decorations and lanterns are commonplace during New year celebrations.(Photo by The Mirror.)

How is Chinese New Year celebrated?

Chinese New Year is celebrated with the ringing of bells, the lighting of firecrackers and watching traditional lion dances.

In China New Year’s Eve is seen as an important date, with families gathering together for a reunion dinner. Firecrackers are then let off to signal the end of last year and the beginning of next.

On New Year’s Day, families gather, clean their houses and sweep away bad-fortune.

Red envelopes stuffed with “lucky money” are given to children, along with written wishes for their kids to grow up healthy.

However Chinese New Year has also been touched by the digital age, with red envelope apps – where people can exchange cyber money – being launched.

This sweet and sour pork is prepared American-style with more batter and deep-fried twice for extra crispiness. 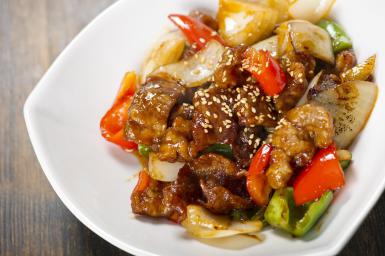 Plain, buttery, salty, cheesy, or drizzled with caramel.  The toppings are endless. Pop some corn and watch your favorite movie.

Or, instead of eating it, use the fluffy kernels as decorations in a garland or for inexpensive packing material.

There is no such thing as “hull-less” popcorn. All popcorn needs a hull in order to pop. Some varieties of popcorn have been bred so the hull shatters upon popping, making it appear to be hull-less.

Most popcorn comes in two basic shapes when it’s popped: snowflake and mushroom. Snowflake is used in movie theaters and ballparks because it looks and pops bigger. Mushroom is used for candy confections because it doesn’t crumble.

The world’s largest popcorn ball, according to Guinness World Records 2015, was created in 2013 at the Indiana State Fair. With the help of Pop Weaver, Snax in Pax, and Indiana’s Family of Farmers, the popcorn ball weighed in at 6,510-pounds, 8 feet in diameter.

For recipes, check out Popcorn.org.

The Ruby-throated Hummingbird is one of the smallest hummingbird species. (Photo by Hummingbirds Plus)

Cheerios® Birdfeeders: To make each feeder, string Cheerios® onto a large pipe cleaner, leaving about an inch from the top. Hang the bird feeders on the trees outside.

For something unconventional to feed birds this winter, read this article from Bird Watcher’s Digest on the Top 10 Weird Things to Feed Birds by Bill Thompson, III.  Grape jelly and eggshells are among the list.

For the Birds – Joke 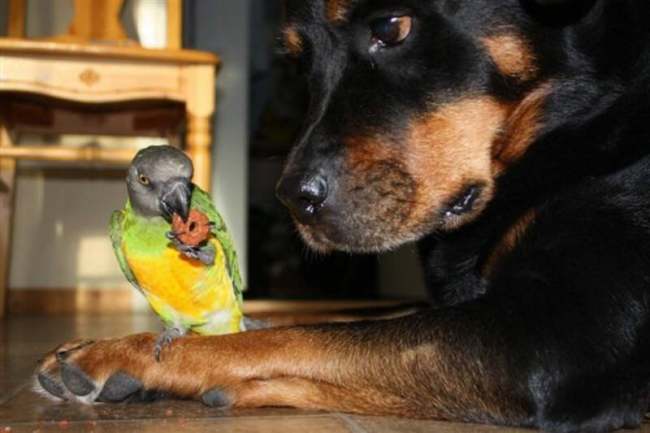 Introduce other pets to your Rottweiler early. Click here for ASPCA tips on how to prevent and solve Common Dog Behavior Issues.  (Photo by Rottweiler – Best Guardian Dog)

Mrs. Smith’s dishwasher quit working, so she called a repairman.  He couldn’t accommodate her with an evening appointment and since she had to go to work the next day, she told him, “I’ll leave the key under the mat.  Fix the dishwasher and leave the bill.  I will bring a check by for you later.”

“Oh and by the way,” she added, “Don’t worry about my dog.  He won’t bother you.  But, whatever you do, under NO circumstances, don’t talk to my parrot!”

When the repairman arrived the next day, he discovered the biggest and meanest looking Rottweiler he had ever seen.  But, as she said, the dog just lay there, watching him go about his business.

However, the parrot drove him crazy with his ceaseless squawking and talking.  Finally unable to contain himself he shouted, “Shut up, you stupid bird!”

No trivia is too trivial.  Beat the winter of the doldrums and pull out the trivia board game for a round or two.