According to Wikipedia.org, “Hot Cross Buns” is an English language nursery rhyme, Easter song and street cry referring to the spiced English bun associated with Good Friday known as a Hot Cross Bun. It has a Roud Folk Song Index number of 13029.

The most common modern version is:

If you have no daughters,
give them to your sons.
One a penny two a penny,
Hot cross buns!

Origins
The earliest record of the rhyme is in Christmas Box, published in London in 1798. However, there are earlier references to the rhyme as a street cry in London, for example in Poor Robin’s Almanack for 1733, which noted:

Good Friday comes this month, the old woman runs
With one or two a penny hot cross buns

Below is a recipe from Pioneer Woman by Ree 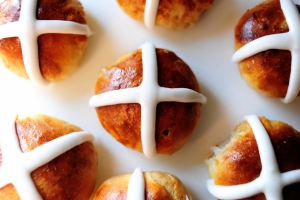