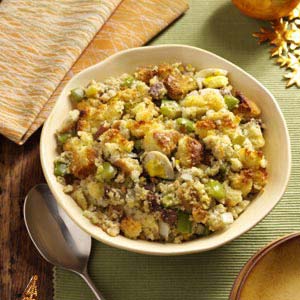 “This day we would give about Very Rich Challah Bread Recipe for you, I guess this is an enchanting hairstyles model with wonderful inspiration so you will obtain a lot of new ideas for your hairstyles. You can also apply those ideas quickly by seeing these pictures, the details of each design can be used for your demand.

Challah bread recipe in this post is for decadent and very rich. It is the best challah that you perhaps will love. The ingredients I give to you today will help you to make 2 large loaves. This recipe is ready for about 2 1/2 hours.”

Indian style Naan bread is soft and chewy and so easy to make at home. It’s the perfect accompaniment to so many meals. What is Naan Bread? Similar to pita bread or flat bread, naan bread is a soft, thick bread. It is usually cooked in a clay tandoori oven and served warm with butter. It…

via Naan Bread — Your Homebased Mom

The not-so-secret ingredient is mashed potatoes.  IF you have any left-overs from the holiday meal but not enough potatoes to go around, this is the best way for everyone to enjoy them.  (Besides… waste not, want not.)

Don’t forget to knead bread and then let rise prior rolling into balls in a lightly greased pan.

The following recipe is credited to First Lady Dolley Madison.

According to Wikipedia, she was noted for her social gifts, which boosted her husband’s popularity as President. In this way, she did much to define the role of the President’s spouse, known only much later by the title First Lady – a function she had sometimes performed earlier for the widowed Thomas Jefferson.

Dolley Madison also helped to furnish the newly constructed White House. When the British set fire to it in 1814, she was credited with saving the classic portrait of George Washington.

In widowhood, she often lived in poverty, partially relieved by the sale of her late husband’s papers.”

Directions: In a bowl, cream cheese and butter together. Add remaining ingredients and mix thoroughly to form dough.

Roll out dough on a floured board to 1/4″ thickness.  Using a sharp knife, cut into strips about 1/2″ x 4″ wide.  Place strips on an un-greased baking sheet.

By Emily Wyckoff for Rachael Ray 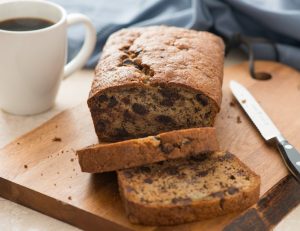 This is a classic banana bread – moist and full of chocolate chips! This recipe is one of my family’s favorites that I make on a sometimes weekly basis. I am the only regular banana eater in the house (besides my dog – he can hear me peeling a banana from the opposite end of the house and comes running) but keep buying them every week because my kids request the banana bread. A great way to use your overripe bananas, this loaf makes a great hostess gift plus it freezes well tightly wrapped in foil the freezer for up to 3 months.

Recipe by copetenn for All Recipes.com 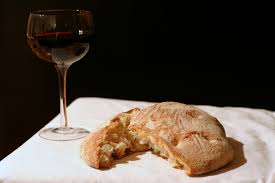 Meal of the Last Supper. (Photo by First Baptist Church of Montreal) 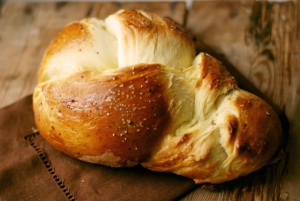 Photo by Dine and Dash

Directions:
1. Place all ingredients in order into the basket of the machine. Make a well in the dry ingredients before putting in the yeast.
2. Close the bread machine door, set it on the dough setting and walk away for around 1 ½ hours.
3. When the dough is ready, mold it at least 2 loaves. For a traditional look, divide each loaf info 3 parts and braid. Place on greased cookie sheets. Cover loosely with towel. Let it rise for 2-3 hours.
4. Preheat oven to 350 degrees Fahrenheit.
5. Brush the top of the challah gently with an egg yolk. If desired, sesame or poppy seeds can be sprinkled on top of the egg wash.
6. Bake at 350 degrees Fahrenheit for approximately 30 minutes.

To check if the bread is done baking, gently knock on the bottom of it. A hollow sound means the bread is ready.