The practice of witchcraft is deeply rooted in history, and has—excuse the joke—conjured up some very interesting myths. Here are a few facts.

1. MOST WITCHES WEREN’T BURNED AT THE STAKE.

The common image of a witch’s execution shows a large group of hysteric people surrounding the guilty person on a burning pyre—but immolation was not the primary means of execution used for those accused of witchcraft. During the Salem Witch Trials, no one was burned to death; all of the accused that pled their cases and were found guilty during the Trials in 1692 were hanged. In fact, no one found guilty of witchcraft was ever executed by burning in the American colonies—immolation wasn’t permissible by English law. But one person was pressed to death by large stones: Giles Corey, a man who refused to plead guilty or not guilty for charges of witchcraft during the Trials. The court found Corey guilty despite staying mute by using the French legal precedent of “peine forte et dure.” Corey is the only person in US history to be pressed to death by court order. 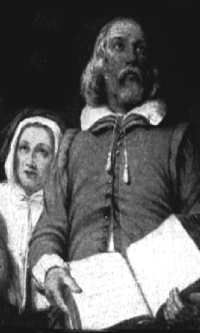 Giles Corey, a prosperous farmer, and his wife Martha were caught in the Salem Witch trials. Giles’ punishment was death by heavy stones pressed upon his body.

Historically-rooted misogyny led many to believe that women were somehow more susceptible to the dark arts or temptation by the Devil, and therefore more likely to be witches. For instance, the Laws of Alfred, written by King of Wessex Alfred the Great in AD 893, specified witchcraft as an expressly female activity. But men practiced, too, and were called many different names, including a wizard, a warlock, or a sorcerer.

Countless women and men were indiscriminately persecuted for witchcraft throughout history. During the Trier Witch Trials in Germany, which lasted from 1581 to 1593, a total of 368 people were executed—and many of the victims were leading male figures of the cities and surrounding villages, including judges, councilors, priests, and deans of colleges. In the Würzburg Witch Trial, which stretched from 1626 to 1631, 157 men, women, and children were burned at the stake for such random reasons as allegedly humming songs with the Devil to being a vagrant unable to give an explanation as to why they were passing through the town of Würzburg. 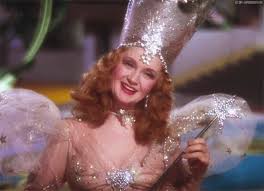 Glinda the Good Witch of the North was played by actress Billie Burke in 1939 movie The Wizard of Oz.

3. NOT ALL WITCHES WERE BAD.

Even though we’ve got that common image of an evil witch—a warty old woman dressed all in black, riding a broomstick, with a pointy hat—anybody familiar with The Wizard of Oz knows that there can be good witches too! Glinda the good witch was a representation of the benevolent half of witchcraft, known as white magic. Historically, practitioners of white magic were known as white witches, and they were more folk healers than devious people out for double, double toil and trouble. However, writer C.S. Lewis reversed the notion for The Chronicles of Narnia saga, making one of the main antagonists the icy and evil White Witch.

4. PEOPLE COULD BE CONVICTED OF WITCHCRAFT WITHOUT ANY SOLID EVIDENCE.

During the Salem Witch Trials, most of the legally-recognized evidence used against those accused of witchcraft amounted to spectral evidence, or “witness testimony that the accused person’s spirit or spectral shape appeared to him/her witness in a dream at the time the accused person’s physical body was at another location,” which was accepted “on the basis that the devil and his minions were powerful enough to send their spirits, or specters, to pure, religious people in order to lead them astray.” Other evidence used against them were so-called “Witch’s Marks” on their skin that allegedly proved they had made pacts with the devil. Contemporary research suggests these marks were possibly small ordinary lesions or supernumerary nipples.

5. WE DON’T KNOW WHERE THE WORD “WITCH” CAME FROM.

All the etymology geeks out there may or may not be surprised to know that the word “witch” is of indeterminate origin. The closest and most obvious possible origin is the Old English word wicce, which means “female sorceress,” and is the basic linguistic root for the modern day pagan religion, Wicca. Another more specific possibility is a split meaning coming from the Old English wigle, meaning “divination” and wih, meaning “idol,” both coming from the Proto-Germanic word wikkjaz, which means “necromancer,” or “one who wakes the dead.”

In the 15th century, witchcraft was of grave concern to a lot of people, and major pieces of literature were written about witches. The most famous was the Malleus Maleficarum, a legal and theological document that became the de facto handbook on how to deal with witches and witchcraft, and spurred the nascent hysteria caused by witch-hunting in Europe that would last well into the 18th century. The book was written by two clergyman of the Dominican Order—Jakob Sprenger, the dean of the University of Cologne, and Heinrich Kramer, a theology professor at the University of Salzburg—and used Exodus 22:18, “You shall not permit a sorceress to live,” as its basis to detect and persecute any and all witches.

Even people as important as kings got in on the action. James I of England’s 1597 book, Daemonologie, was a treatise that threw his support behind the importance of the practice of witch hunting. James himself even presided over the 1590 North Berwick Witch Trials when he believed a devious Earl plotted to overthrow the then-King of Scotland with the help of a coven. 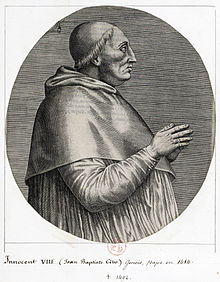 7. A POPE ONCE CONFIRMED THAT WITCHES EXIST.

The Catholic Church saw witchcraft as a threat to all of its followers. In 1484, Pope Innocent VIII issued a papal bull titled “Summis desiderantes affectibus” (“Desiring with supreme ardor”) that recognized the existence of witches, saying, “many persons of both sexes, heedless of their own salvation and forsaking the Catholic faith, give themselves over to devils male and female,” and that they “afflict and torture with dire pains and anguish, both internal and external, these men, women, cattle, flocks, herds, and animals, and hinder men from begetting and women from conceiving, and prevent all consummation of marriage; that, moreover, they deny with sacrilegious lips the faith they received in holy baptism; and that, at the instigation of the enemy of mankind, they do not fear to commit and perpetrate many other abominable offences and crimes, at the risk of their own souls, to the insult of the divine majesty and to the pernicious example and scandal of multitudes.” The papal bull effectively gave Kramer and Sprenger—the writers of the Malleus Maleficarum—the God-given authority to begin their Inquisition.

8. LAWS ABOUT WITCHCRAFT WERE IN PLACE IN THE MID-20TH CENTURY.

Technically, England’s Witchcraft Act of 1735 was still official and on the books until 1951, when it was replaced with the Fraudulent Mediums Act. The language of the original Act wasn’t about persecuting witches per se, but rather made it illegal for people to claim that others were witches. Yet being legally convicted meant that you purported to have the powers of a witch—and in fact, a woman named Jane Rebecca Yorke was found guilty in 1944 under the law, though she was convicted mostly because she was defrauding people with bogus séances.

The origin of the association of the broad-brimmed, pointy hat with witches is murky at best. One school of thought is that it is based on the peaked cap Jews were required to wear after a 1215 decree by Pope Innocent III. Rampant anti-Semitism soon caused folks to associate heretics, pagans, and demons with wearers of the so-called Judenhat. In the early 1700s, the image was co-opted by artists who immortalized the image in paintings of the old hag in the witch’s hat we know today. 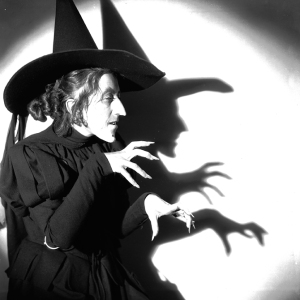 Actress Margaret Hamilton dressed as the Wicked Witch of the West in the movie “The Wizard of Oz.”

10. WITCHES REALLY DID “FLY” ON BROOMSTICKS, IN A WAY.

The origins of the broom as a witch’s preferred mode of transportation is … pretty weird. People who practiced witchcraft experimented with herbs and potions in rituals that may have used the mandrake plant. Mandrake contains scopolamine and atropine, two alkaloids that cause feelings of euphoria in low doses and hallucinations in higher doses.

The rituals—performed in the nude—called for the participants to rub an herbal ointment containing the mandrake on their foreheads, wrists, hands, and feet as well as on a staff that they would “ride.” The friction of the ointment-coated staff on the witches’, uh, lady parts would absorb the ointment into their system and cause a floating sensation—and their description of that feeling is what perpetuated the symbol of the witch flying on a broomstick.