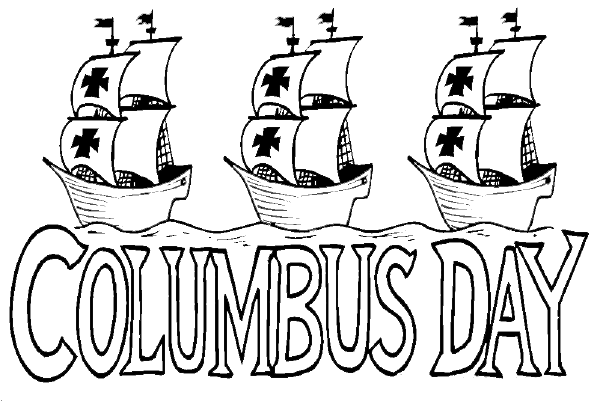 Color the 3 ships: The Nina, La Pinta and the Santa Maria.

And… well… then there’s fortunate mistakes.  For example, Explorer Christopher Columbus meant to arrive in India… but instead he discovered a New World.  There is some controversy regarding that as well… so let’s just say, he “landed” in the New World and made his mark.

An artist’s depiction of Christopher Columbus arriving in the “New World.”

Here is the most popular Columbus Day poem in the United States. It’s used to help teach the history of Columbus.

He had three ships and left from Spain;
He sailed through sunshine, wind and rain.

He sailed by night; he sailed by day;
He used the stars to find his way.

A compass also helped him know
How to find the way to go.

Ninety sailors were on board;
Some men worked while others snored.

Then the workers went to sleep;
And others watched the ocean deep.

Day after day they looked for land;
They dreamed of trees and rocks and sand.

But “India” the land was not;
It was the Bahamas, and it was hot.

The Arakawa natives were very nice;
They gave the sailors food and spice.

Columbus sailed on to find some gold
To bring back home, as he’d been told.

He made the trip again and again,
Trading gold to bring to Spain.

The first American? No, not quite.
But Columbus was brave, and he was bright.