Marilyn Monroe celebrates the 4th of July with a bang in the 1950s.

The Public Broadcasting Service will broadcast live from the Nation’s Capital on Saturday, July 4, 2015 at 8 p.m. (Eastern Time) to celebrate America’s Independence. 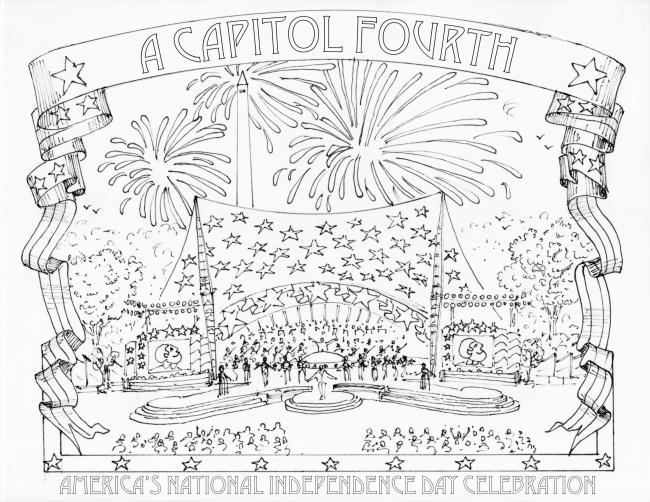 Click here for information on PBS: A Capitol Fourth.

Have a safe and happy 4th of July!

On 5 November 1605 Londoners were encouraged to celebrate the King’s escape from assassination by lighting bonfires, “always provided that ‘this testemonye of joy be carefull done without any danger or disorder'”. An Act of Parliament designated each 5 November as a day of thanksgiving for “the joyful day of deliverance”, and remained in force until 1859. Although he was only one of 13 conspirators, Fawkes is today the individual most associated with the failed Plot.

The Guy Fawkes mask is a stylised depiction of Guy Fawkes, the best-known member of the Gunpowder Plot, an attempt to blow up the House of Lords in London in 1605. The use of a mask on an effigy has long roots as part of Guy Fawkes Night celebrations.

In Britain, 5 November has variously been called Guy Fawkes Night, Guy Fawkes Day, Plot Night  and Bonfire Night; the latter can be traced directly back to the original celebration of 5 November 1605.  Bonfires were accompanied by fireworks from the 1650s onwards, and it became the custom to burn an effigy (usually the pope) after 1673, when the heir presumptive, James, Duke of York, made his conversion to Catholicism public. Effigies of other notable figures who have become targets for the public’s ire, such as Paul Kruger and Margaret Thatcher, have also found their way onto the bonfires, although most modern effigies are of Fawkes. The “guy” is normally created by children, from old clothes, newspapers, and a mask. During the 19th century, “guy” came to mean an oddly dressed person, but in American English it lost any pejorative connotation, and was used to refer to any male person.

William Harrison Ainsworth’s 1841 historical romance Guy Fawkes; or, The Gunpowder Treason portrays Fawkes in a generally sympathetic light, and transformed him in the public perception into an “acceptable fictional character”. Fawkes subsequently appeared as “essentially an action hero” in children’s books and penny dreadfuls such as The Boyhood Days of Guy Fawkes; or, The Conspirators of Old London, published in about 1905. Historian Lewis Call has observed that Fawkes is now “a major icon in modern political culture”. He went on to write that the image of Fawkes’s face became “a potentially powerful instrument for the articulation of postmodern anarchism”[h] during the late 20th century, exemplified by the mask worn by V in the comic book series V for Vendetta, who fights against a fictional fascist English state.

Guy Fawkes is sometimes toasted as “the last man to enter Parliament with honest intentions.”

1. Who designed the National Mall in Washington, D.C.?

Answer: The Mall was originally envisioned by its designer, Pierre L’Enfant, as the foremost boulevard of the city, the so-called “Grand Avenue”.

2. Who was the first signer of the Declaration of Independence, and why is his signature so large?

Answer: John Hancock was the first person to sign the Declaration of Independence. Legend has it that he made his name large and clear to make sure that King George III of England could read it without his spectacles!

James Montgomery Flagg created “the most famous poster in the world.“

3. What famous character with a stars-and-stripes top hat has become a symbol of America?

Answer: Uncle Sam. The character was popularized during the War of 1812, when someone saw the initials “U.S.” on an army supply container and suggested that the shipments came from “Uncle Sam.”

4. On July 4th of what year did the 50-star American flag wave for the first time as Hawaii was granted statehood?

5. Which of our Founding Fathers created the blueprint for our Fourth of July celebrations by suggesting that the day be celebrated with “bonfires and illuminations from one end of this continent to the other” by succeeding generations of Americans? 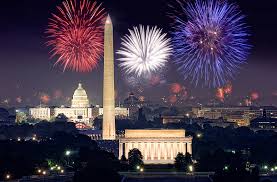 A. Boston’s first fireworks display
B. The State of New York emancipates its slaves
C. Construction begins on the Washington Monument
D. Centennial celebrations are held in the United States
E. The first public Fourth of July reception at the White House

ANSWER: In Washington, D.C., in 1848, the laying of the cornerstone of the Washington Monument takes place with President James Madison, First Lady Dolly Madison and other VIPs in attendance.

7. About how many people were living in the colonies in July 1776?

Answer: About 2.5 million people populated the 13 colonies when America declared its independence. Today, the U.S. population is estimated to be over 310.5 million.

Destiny? President Calvin Coolidge was born on 4th of July.

8. Only one president, Calvin Coolidge, was born on the Fourth of July. Three presidents died on that date. Who were they?

9. What American president said, “We dare not forget that we are the heirs of that first revolution?”

10. On July 4, 1976, Americans all over the country celebrated our nation’s 200th birthday. How many tons of fireworks were exploded in a magnificent display above the Washington Monument in Washington, DC?

Answer: 33 tons of fireworks were exploded above the Washington Monument, along with laser beams that spelled out “1776-1976, Happy Birthday, USA”.

11. Which of John Philip Sousa’s compositions was designated the National March of the United States in 1987?

A. “The Liberty Bell”
B. “US Field Artillery”
C. “The Stars and Stripes Forever”
D. “The Washington Post March”

An act of Congress designated “The Stars and Stripes Forever” the National March of the United States.

12. When Francis Scott Key wrote “The Star-Spangled Banner” in 1814, it immediately became popular with the public. When was it adopted as our national anthem?

Answer: “The Star-Spangled Banner” was named our national anthem on March 3, 1931, through an Act of Congress.

13. What song has special significance to legend Barry Manilow on the Fourth of July?

Answer: Barry Manilow sang his composition “Let Freedom Ring” on the 2009 A Capitol Fourth.  He said he always dreamed of singing the song at the U.S. Capitol.