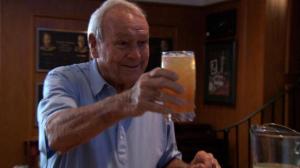 Cheers! Golfer Arnold Palmer lifts a glass of his namesake: half tea, half lemonade.

The man himself sets the record straight in an entertaining new 30 for 30 short, “The Arnold Palmer.”

“My wife made a lot of iced tea for lunch, and I said, ‘Hey babe, I’ve got an idea.’ You make the iced tea and make a big pitcher, and we’ll just put a little lemonade in it and see how that works. We mixed it up, and I got the solution about where I wanted it and I put the lemonade in it. I had it for lunch after working on the golf course. I thought, ‘Boy, this is great, babe. I’m going to take it when I play golf. I’m going to take a thermos of iced tea and lemonade.’ “

Palmer goes on to tell the story about how he was in a Palm Springs restaurant, ordered the drink to his specifications and was overheard by a woman sitting nearby. “I want an Arnold Palmer,” she told the waitress. “I want what he ordered.”

With that, a mixed drink was named and a legendary golfer extended his influence beyond the course. Ten years ago, the rights to the drink were sold to AriZona Beverage Co. Sales exceeded $100 million in 2010.

This was featured in the USA Today article by Chris Chase.